And the winners are.. 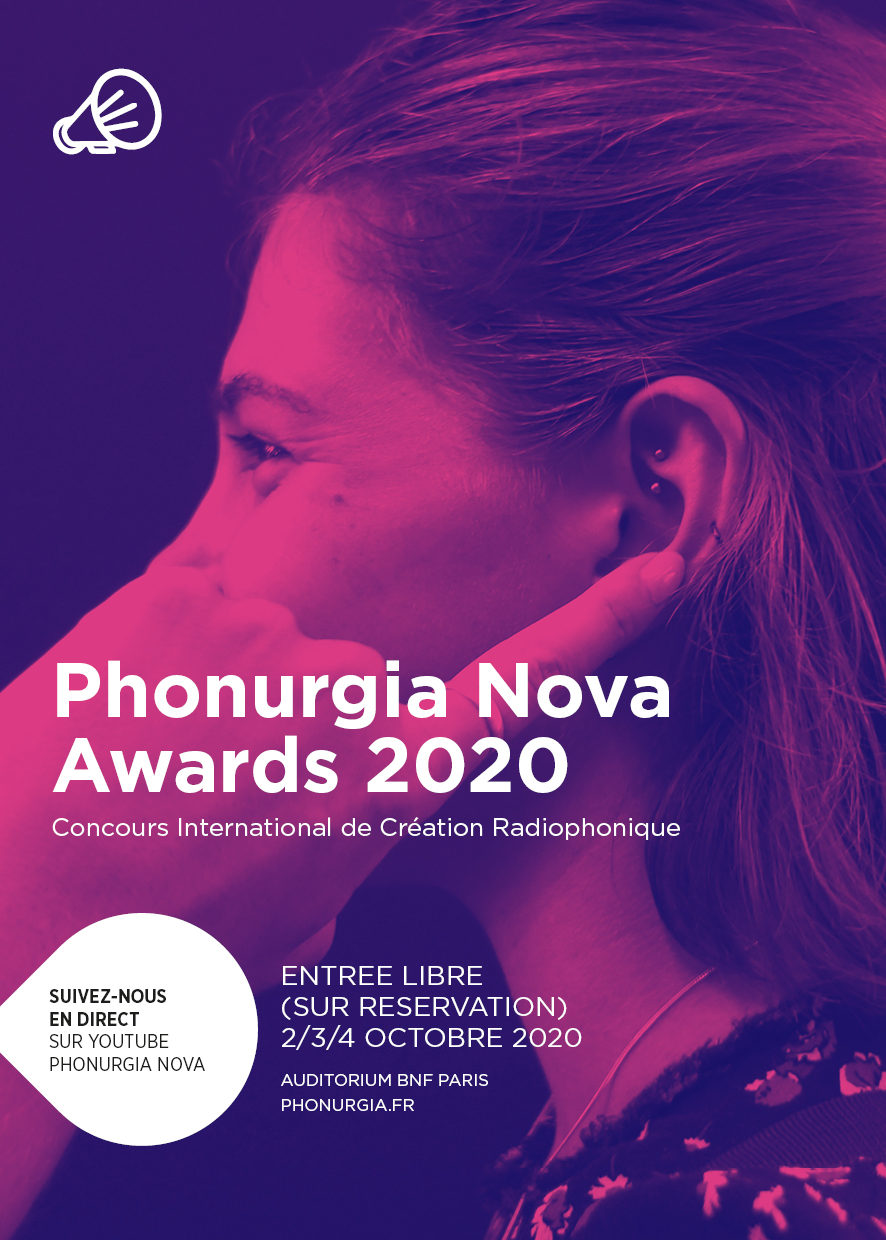 And the winners are..

We are very proud to share with you the Grand Prize Winners for the Phonurgia Awards 2020, announced last Sunday evening at the BnF.

For the 25th edition of the Phonurgia Nova Awards – which took place this year in the unprecedented context of the global pandemic – the competition stood proud by celebrating the freedom to tell its stories with and through the medium of sound, over the airwaves and beyond. Following in the footsteps of the previous years, and across the 5 featured awards categories, it rewarded authors who, through a thousand and one aesthetic paths, pushed the boundaries of listening.

305 works from 30 countries were received, 40 of which were nominated for consideration. For this year, the 25th edition, there was an unprecedented volume of submissions, offering multiple perspectives from across today’s creative radio and sound community. By nominating the most ambitious, demanding and accessible projects, the jury explored the blossoming creativity of a generation of new authors from Europe and further afield who are seizing the recording and podcasting tools enabling us to listen differently. This year’s winners once again represent a very diverse, international selection.

“Pablo Sanz’s piece possesses a great richness in timbre, frequencies and dynamics, and projects a very fine work onto the sonic plane. The first sequence guides us inwards and beautifully implements the radical ecological approach developed by the philosopher Vinciane Despret: that of placing ourselves in relation to other animal species as individuals in relation to other individuals, of perceiving them not simply as representatives of their vast family, but in their singularity as subjects. Strictly speaking, we are challenged and questioned by these “strange strangers”. Juliette Volcler

Jury’s Mention to Presage by Mark Ferguson (Great Britain)
This piece will be performed in the next edition of the Elektrophonie Festival 2021.

“Mark Ferguson offers an allegory rich in multiple meanings – more so, no doubt, than the one induced by its title alone. Following on from “The Bees of FDR Drive” (selected for the Phonurgia Nova Awards 2019), he builds a certain way of being in the world, seeking the precise place and singular moment to record. A quest not only for sound but also for ethics, forcing him to perpetually shift his focus in order to let the living be heard from listening perspectives away from the human. ” Juliette Volcler

“This phonography, anchored in a sonic space of remarkable depth, plunges us into a disturbing atmosphere, in which the quivering of a community of corvids opposes, with a form of delicacy, the fatuity of men. ” Marc Namblard

The Human Voice Archives Prize – Awarded by the BNF

It was difficult to choose between several works which all responded, in very different ways, to the requirements of this prize category: to capture, if possible through inventive forms, the living and speaking man.

“We have chosen this creation by Matthieu Cornelis because he took the time to listen to a practice (the imitation of the deer’s bellow) which though it might seem crazy, is one whose double inscription (in a man and his young son) is heard in a symbolic culture that is at once concrete, intimate and learned, of the forest and the animal. He makes us hear it physically, through recorded sounds and noises, through the soft-spoken reading of a novel, and through carefully chosen words: the sounds of these voices, and their slight accent which introduces the ear to this region and phonically retains it”. Marie-Madeleine Mervant-Roux

“In this account of the life of two twins born in 1984 and diagnosed with cerebral palsy, speech is central both as subject (their difficulty in speaking), but above all also as phonic and poetic material, triggering a listening experience that is itself out of the ordinary, slow and refreshing, which leads to a rediscovery of the use of language”. Marie-Madeleine Mervant-Roux

We distinguished this fiction by Florent Barat and Sebastien Schmitz for its bold, creative sound, which was very effective in carving dangerous hollows – silences, or explosions of lyrical vibrations – with fragile footbridges of a cappella alexandrine verses uttered softly, in a risky and striking composition.

Jury’s Mention and “Coup de Coeur” from the Centre-Wallonie-Bruxelles de Paris to Hayley Suviste for Lôka, 27’16, self-production, (Great Britain) “An abundant elsewhere, rich in sonic material that is both familiar and transformed. A powerfully hypnotic piece.” Stéphanie Pécourt

“This cubist and fragmentary portrait of the city of Vienna hides another, astounding one. In order to create Magneto Mori: Vienna, Mark Vernon recorded sounds on magnetic tapes which he then “buried” so that they would deteriorate, then, once they were “degraded”, he “cleaned” them and then “used” them for this work. The result is a new way of listening: the erosion of sound time is thus accelerated, simulated, amplified and brought to life. From then on, the listener, instructed in such a method of sound fabrication, re-reads the title of the work in a different way… Magneto Mori: Vienna… As in reference to the medieval “Memento Mori” which means “Remember that you are going to die”… And this portrait of Vienna by Mark Vernon then becomes another world: an archaeology of the city as well as of the sound device, the transformation of space into time and vice versa, a story of ghosts in the heart of Europe. Sumptuous.” Alexandre Castant

“I would like to salute the remarkable work of Manon Prigent who, in a classic form, that of the documentary, plunges us into the depths of sound. By exhuming recordings made by Nicolas Frize twenty-five years ago, by collecting his reflections of yesterday and today, she has managed to find, through a construction in the abyss, the subtle balance between speech about sound and its tangible reality. The recording here is less the search for sound objects for a later composition than the basis of a reflection shared with the actors of the place of experience. Sound thus becomes a social object. ” Christian Zanesi

Back to the blog