WHEN SOUND IS AN ART

Once a year, by means of numerous European radio partners, Phonurgia Nova Awards distinguishes authors who explore the reality and the sound imagination.

Born in 1986, the Festival is the oldest and most prestigious event in the field of radio and sound art in France. This year, 272 productions from 30 different countries were entered, and 35 of those are selected for the Festival. Our ear is loaded of a new culture of sounds, and a new art of listening, inspired by radio and sound practices. The Phonurgia Nova Awards take the measure of the phenomenon and identify the outlines of this abundant universe. Chantal Dumas (Canada), Yves Meylan (Switzerland), Dominique Petitgand (France), Bernadette Johnson (Switzerland), Alessandro Bosetti (Italy), Andréas Bick (Germany), Hanna Hartman (Germany), Sébastien Dicenaire (Belgium), Joaquin Cofreces (Argentina), Sherre Delys and Russel Stapleton (Australia) : the list of the creators “crowned” in 30 years is impressive. Again this year, we invite you to discover authors who renew the radio and sound art all over the world. During a “weekend marathon”, their works will be listened at the Bibliothèque Nationale de France (the french national library) by a live deliberative jury.

Sounds, words, voices among the books !

Come at the Festival Phonurgia Nova and attend public listening and deliberation days. 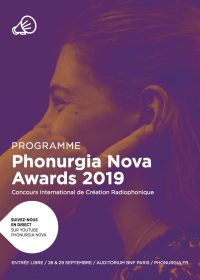